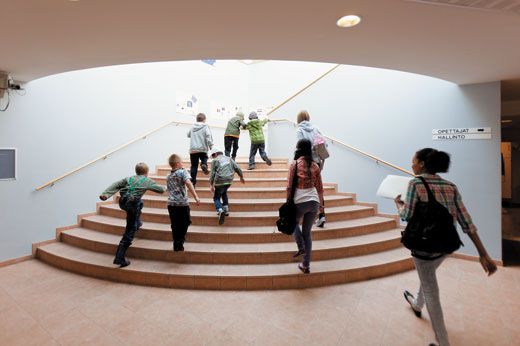 Let’s pack our bags and take the first flight out of Seoul, South Korea to Helinski, Finland.
You are probably wondering what is so special about Finland. In addition to being the land of saunas and avid cross-country skiers, Finland possesses one of the world’s most successful education systems. Among all registered nations, Finland ranks 3rd in reading, 7th in math, and 4th in science. What’s their secret?  Let me break it down for you…

Finland’s education system is the epitome of tax dollars at work. The Finnish government offers free public schooling from daycare all the way to doctoral studies. Likewise, the government fully subsidizes school lunches and offers students health care if they are not covered by their parents’ health insurance.

In Finland, traditional education does not start until children are seven years old. In pre-school and kindergarten, students are taught to develop cooperation and communication skills in lieu of a subject-based curriculum.

After kindergarten, Finnish students attend peruskoulu, which is essentially Finland’s version of elementary school. The atmosphere of peruskoulu can be described as relaxed, informal, and clean. For the first few years, teachers evaluate students using verbal assessments instead of formal grades.  Furthermore, Finland educators do not advocate high-stakes tests of any kind.

As cliché as it sounds, Finland educators have found a way to make learning fun. For example, teachers will bring television sets into school so that younger students can watch foreign shows with Finnish subtitles.  They are being tricked into learning how to read!

Now it’s time for the age-old question: what can the United States learn from Finland’s education system? It goes without saying that if the United States raised taxes, public schools would inherently benefit.  However, the reality is that most Americans do not want to pay higher taxes for something that is not guaranteed. The word “socialism” and phrase “redistribution of wealth” have taken on negative connotations since the days of Ronald Reagan and the Cold War. Moreover, the population size of the U.S. (~320 million) compared to Finland (~5 million) makes this academic utopia more of a pipe dream than a reasonable proposition.

With that having been said, U.S. educators should implement Finland’s pre-school and kindergarten curricula. Teaching young students to work in teams, respect one another, and listen to instructions will lay the groundwork for academic development and may even reduce incidents of bullying.